On the 28th December, 1986 South Australia celebrated its Jubilee of 150 years, and it is timely to consider its Godly beginnings and the aspiration of its founders for the future.

The person who opened up the Southern portion of Australia for free settlement was Captain Charles Sturt, one of Australia's greatest and most heroic inland explorers. He was a man of courage and prayer, for "in many a scene of danger, of difficulty, and of sorrow he had risen from his knees calm and confident." 1

God spared his life on numerous occasions. He endured tremendous hardships when facing the harshness of the Australian inland, and, as Sturt completed his exploration with his men, who had complete confidence in and admiration for him, he "went down on his knees and with tears of joy offered his thanks to Almighty God."2

Charles Sturt loved the majesty of the bush and often "praised his God that He had done such wondrous things."3 It was Sturt who in February, 1834 wrote to the Colonial Office. "He prophesied that the men of South Australia would one day people the heart of the continent and that the Australian colonies would emulate America. He urged them to convince the aborigine that the white man was coming as a brother. He urged them, too, not to give the aborigine trifling presents but to protect him against violence and aggression, until that day when as children of the same heavenly Father, they had all learned to look at each other with love and charity."4

Then there were men who believed God had a special purpose in the Christian settlement of Australia. Men such as the Permanent Under Secretary of the Colonial Office, James Stephen, who "believed that the government of men should conform to the government of God"5, and encouraged Christian families to settle here, as well as being influential in the choice of Christian leaders in the colonising of the country.

Stephen's desire was to establish our nation as "a Christian virtuous enlightened state in the centre of the eastern hemisphere and within reach of the Chinese, Hindu and Mohammedan nations."6 Certainly we are seeing the continuing fulfilment of this great prophetic statement given to the Lieutenant-Governor of Van Dieman's land more than 160 years ago, as we see China opening up to the printing of the word of God, and as we see missionaries continuing to be sent out from this nation.

Many Christians were instrumental in the formation of South Australia, among them was a man named Robert Torrens who stated in a speech in the House of Commons in 1827 that "we are co-operating in the scheme of Providence and are the favoured instruments in causing Christian civilisation to 'cover the earth as the waters cover the sea!' "7

As chairman of the Colonization Commissioners when they first met in May 1835, he expressed the hope that they would be performing "an act of mercy for the natives of southern Australia by bringing them the gift of their great civilization and their Holy faith."8

Almost all of the directors of the South Australian Company were lay preachers. Robert Gouger, who was appointed Colonial Secretary was a devout Evangelical and even Wakefield acknowledged that without Gouger South Australia would not have been settled.9 It was Gouger who wrote a "Sketch of a Proposal for Colonizing Australia". He also organized the first public meeting for the free settlement of the South Australian Coast attended by 2,500 people in a Christian Centre, "Exeter Hall" in London.

George Fife Angas, who resigned as a Colonization Commissioner to take up a position on the board of directors of the South Australian Company, was also a committed Christian and the real father of South Australia's religious liberties. "My great object was, in the first instance, to provide a place of refuge for pious Dissenters of Great Britain, who could in their new home discharge their consciences before God in Civil and religious duties without any disabilities."10 It was Angas' hope "that South Australia will become the headquarters for the diffusion of Christianity in the Southern Hemisphere".11

"It was claimed that in fifty years he circulated over one million copies of scripture, many millions of tracts and two million copies of devotional books such as Spurgeon's Morning by Morning and Evening by Evening. 12

Angas provided a voluntary nondenominational elementary education for sixpence a week. The schools' sole textbook was the Bible!

Charles Mann, who believed it was his purpose to assist in the settlement "with the Bible in one hand and the axe (to clear the wilderness in the other"13 was appointed the first Advocate General.

The Colonial Manager was Samuel Stephens, appointed by George Angas because he had been converted at a Wesleyan revival and "fallen to the floor in agony and cried for mercy so piteously that the Holy Ghost had showered the blessing of salvation on him."14

Samuel Stephens arrived in 1836, at Kangaroo Island. However, he apparently had not learnt about the perseverance of the saints, developed a drinking problem, and was replaced by David McLaren, who wanted to enter the Presbyteryian ministry but became a Congregationalist then a Baptist.

The Colonial Office appointed Captain John Hindmarsh as Governor and on the 28th December 1836, he proclaimed South Australia a province, calling upon those present "to prove themselves worthy to be the founders of a great and free colony by their industry and sobriety, by the strict observance of the ordinances of their religion," and to help the natives "by promoting their advancement in civilization and, always under the blessing of divine providence, their conversion to the Christian faith."15

Two days later on the 30th December, Hindmarsh moved from Holdfast Bay inland and named Adelaide where, within eight years there were more preachers and places of worship, than the number in the first decade in New England, U.S.A. 16 and within ten years, over half the population of 9,000 were attending two of the denominational churches, Episcopal and Congregational, and further church buildings were necessary. From its settlement in 1836 to 1915 Sunday School enrolments far exceeded those of day schools!17

Lt. Colonel George Gawler arrived in the infant colony in 1838 to become the new Governor. A hero of Waterloo, was converted reading a book, Evidences of Christianity, and was determined to establish a Christian colony.

Many Christians settled in the colony, the first in the British Empire not to be officially aligned to the Church of England. A group of German Christians, who had been persecuted in Prussia for refusing to allow a secular sovereign to dictate to them about their faith, settled at Klemzig on the Torrens and at Hahndorf. These are the words of Pastor Kavel, their leader, when they swore allegiance in May, 1839:

"On our arrival here, we hailed this hospitable shore as a place of refuge to worship God without disturbance of our consciences, and entertained, and do still entertain, the hope to live and die here. We have found what we have been seeking for many years - religious liberty: we hailed and hail that sovereign under whose direction we are now placed: we consider her and her Government as ordained of God, and with all our hearts we are desirous of being faithful subjects and useful citizens. We have been very glad to profess this our heartfelt desire and deep conviction on Her Majesty's birthday: we consider this also as a profession of Christ our Lord and Saviour, who, through the King of Kings and Lord of Lords, has created all thrones, dominions, principalities, and powers, and who commands his followers to obey them."

Hebrews 11:32 says "And what more shall I say? I do not have time to tell about Gideon, Barak, Samson, Jephthah, David, Samuel and the prophets, who through faith conquered kingdoms, administered justice, and gained what was promised..." So also one could continue about many of the early settlers. People such as Edward John Eyre, Captain Barker, a staunch evangelical, T.Q. Stow, who commenced the first Congregational Church in Adelaide in 1837, Lord Glenelg of the Home Office who permitted the colonising of South Australia, or of Sir George Grey who believed it was such "a dreadful waste of God's bountiful gifts in Australia"18 and who shared with James Stephen the view that "prayer and meditation on God's Holy Word... were the inexhaustible, unfathomable source of all pure consolation and spiritual strength." 19

In conclusion, may we wish South Australians God's richest blessings for the future, and, to quote the words of Pastor Kavel: "May South Australia prosper; and all its inhabitants, its immigrants, and all the natives grow together as one blessed nation labouring unanimously for the advancement of those great objects," and of Captain Charles Sturt: "May the inhabitants of South Australia continue to deserve and to receive the protection of that Almighty power, on whose will the existence of nations as well as that of individuals depends!"20

This exhibition is dedicated to South Australia's founding men and women who brought to the state a rich Christian heritage that helped shape its unique identity.  Many Christians believed that South Australia was distinctive because, unlike other Australian colonies, it was established by godly men and women on a religious basis. They saw it as a colony founded on the principles of religious and political liberty: a great and free colony...under the Blessing of Divine Providence as stated by Governor Hindmarsh in his Proclamation address on 28 December 1836.

During the nineteenth century, Christians worked vigorously to spread the Word, on horseback, by paddle-steamer, bicycle and camel-buggy; in the German, English, Ngarrindjeri and Aranda languages; in the bush, in farmhouses, stone chapels and cathedrals. Adelaide became known as 'the city of churches'.

Father and Founder of South Australia 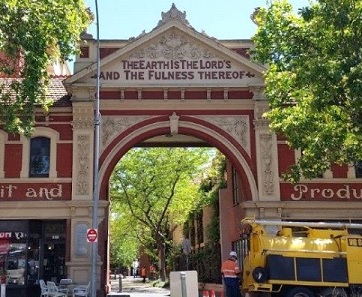 THE GIFT OF THE WHEAT STRIPPER