Read this article about Arthur Stace, a misfit who then came to be a follower of Jesus and a household name (includes a link to film).

Bennelong an Aboriginal after his wife Borangaroo (place on western side of Harbour Bridge) died married Abaroo (Boorong) who was raised for 18 months in Richard & Mary Johnsons home where she was taught some basic English and Scripture.

Bennelong & Abaroo had a son born about 1803 who became a Christian in his youth possibly becoming the first Indigenous evangelist.

More info at this link:

This 97 slide presentation contains extensive notes, pictures and maps detailing much of Australia's Christian history. It can be viewed in the following ways: 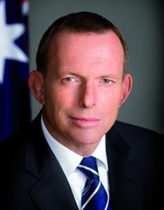 Visit this website to learn more about Australia's National flag.

"Under this flag we have found unity in our diversity and respect in our differences. Together, we have built a modern nation on the idea that all of us can get ahead provided we are prepared to have a go."

The meaning of our flag

Just what does the design of our national flag mean?

A story of the Aboriginal Naden family

Historical Revisionism in the National Curriculum by Prof Augusto Zimmerman

Professor Zimmerman explores the impact of Christianity on human rights and constitutionalism.

Speech on the Rev Richard Johnson

WHY the 'I" went missing in Austrialia del Espiritu Santo

There can be little doubt that Quirós originally intended to apply the name “Austrialia Espíritu Santo” to Espíritu Santo in 1606. The term “Australia” then appeared in subsequent texts, either as an alternative spelling or a spelling error. Quirós’ memorials were only intended to have limited circulation, for King Philip III and royal officials. As the result of an unknown sequence of events the 8th Memorial found its way out of Spain, and by 1625 it had been translated into Italian, Dutch, French and lastly English. By this means it entered the lexicon of several languages and was ultimately applied to our nation, with the word “Australia” appearing for the first time in English in Purchas His Pilgrimes in 1625