The Montgomery Old Testament Bible with the message "Field Marshal Viscount Montgomery, GCB, DSO, the gallant leader of the victorious forces by whose hand God has placed salvation in Zion in the days of El Alamein presented in token of the everlasting gratitude of Palestine Jewry by the Vaad Leumi, General Council of the Jewish Community in Palestine". 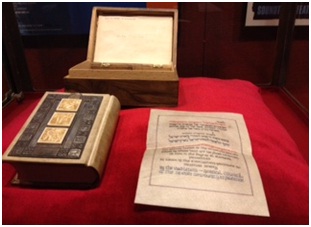 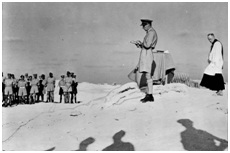 Field Marshal Montgomery commenced prayer meetings when he arrived in Egypt. His father was a Bishop in Tasmania.


Motion by Reverend the Hon. FRED NILE in the NSW Legislative Council 20th November 2012 and agreed to:

1. That this House notes that:

(a) had the German-led forces won at El Alamein in 1942, there is a strong likelihood that the Nazi regime would have brought the Holocaust into the Middle East and attempted to murder some 600,000 Jewish people living in Egypt and the land of Israel, or British Mandated Palestine at the time,

(b) there was an official German plan to attach a specialised murder squad to Rommel's Panzer Army Africa,

(c) following the victory by the allies, led by Field Marshal Viscount Montgomery, the Jewish Government in Israel, before May 1948, presented Field Marshal Montgomery with an official gift of gratitude for his role in saving the Jewish community in Palestine from the impending conquest by the German-led forces commanded by General Rommel, and that gift was a Bible, and

(d) the words on the inscription, attached to the Bible which is the Tenach, or Old Testament, and encased on the cover in silver and mother of pearl are: "Field Marshal Viscount Montgomery, GCB, DSO, the gallant leader of the victorious forces by whose hand God has placed salvation in Zion in the days of El Alamein presented in token of the everlasting gratitude of Palestine Jewry by the Vaad Leumi, General Council of the Jewish Community in Palestine".

(a) congratulates Kelvin Crombie for discovering the location of Field Marshal Viscount Montgomery's Bible in England, bringing it to Jerusalem, and for being custodian of this Bible on a long-term loan during this period of the seventieth anniversary of the Battle of El Alamein,

(b) extends its thanks and congratulations to Kelvin Crombie, an Australian historian and author, who has spent much time researching and documenting the above information in his soon to be launched book, El Alamein – Halting a Possible Holocaust in the Middle East,

(c) acknowledges the work and dedication of Mr Crombie in documenting the vital facts concerning the relationship between various battles in the Eastern Mediterranean between 1940 and 1942 and the welfare of the Jewish people, and

(d) extends its congratulations to Kelvin Crombie on his book's initial launch in the House of Lords in London on 7 November 2012, and on the Australian launch in Sydney in the New South Wales Parliament House Theatrette on 26 November 2012.


The Evangelical Sisters of Mary placed this Nativity scene titled "O Come let us Adore Him" on Monday 26th November 2012 in the foyer of the NSW Parliament. 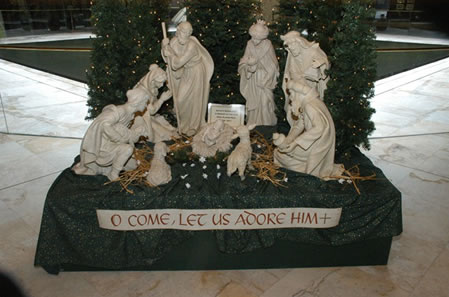 On the 25th August it will be 220 years since Australia's first church opened.

Christian Heritage Sunday will be on Feb 2nd 2014.

National Gathering (1988) video on You Tube

Almost 200 years ago the Gospel arrived on the shores of New Zealand. Read what's being done to commemorate this event.